Karl Dockstader is a resident of the Niagara community. His fierce idealism and pragmatic sensibility surprisingly balance each other out. Karl strives to keep peace, power and a good mind at the forefront of his life balance.

Coming from a small but strong Oneida family has led Karl down the path of service to his family, the community and ultimately every living thing. Karl believes that that order is important to maintain the balance: One must be right with oneself before one strives to help others. After you have made peace with your place in the universe – the only thing we really can control – then it is good to extend out and help others share in your peace.

Professionally Karl benefited from walking through the doors of Niagara College in 2010 where he was persuaded to strengthen his Science, Technology, Engineering and Math skills in pursuing a degree in the electrically engineering heavy Renewable Energy Technologies degree program. His strong communication skills resulted in opportunities to be selected as a public speaker on several occasions and he currently consults for the Niagara Energy Alliance to help set their strategic direction and guide the technical information released from the organization. Karl has written, calculated, spoken and participated in a range of projects for Niagara College, Niagara Research, the Niagara Energy Alliance, and EnerDynamic Hybrid Technologies Inc. where he is currently employed as technical salesperson.

Mr. Dockstader has had the good fortune of being elected to serve as a Director of the Niagara Regional Native Centre since 2012. From June 2014 until June 2015 Karl served as the President but his fierce idealism and role as the spokesperson were two forces that could not level each other off. Serving on the board has gifted Karl with organization skills that he has used to channel the community energy that drove the return of the Pow Wow in 2014. The community Powwow is something that had been at the heart of the NRNC as it turned 40 years old and it is something that many people played a large part in to make a reality. Karl’s role was simply to help facilitate that energy through the processes to make the Powwow a reality.

“There is a shift in the way younger people are thinking about building this world because they are awakening to the reality that doing things the way we do them in perpetuity is impossible.” – Karl Dockstader for the October Grad Spotlight of Inside Niagara College

Similarly when Karl organized the rally to raise awareness for the rally for Missing and Murdered Indigenous Women in the winter of 2014 his role was simply to keep a record of the pulse of the community. That pulse was strong and it was reflected in a strong chorus of calls for an inquiry from many of the women in the Native community who shared their passionate opinions. Their voices were joined by mainstream leaders representing various community groups and even Niagara South MP Malcolm Allen gave a rousing speech demanding changes. The inquiry never came but the sinews of unity in the Niagara Aboriginal community continue to grow. 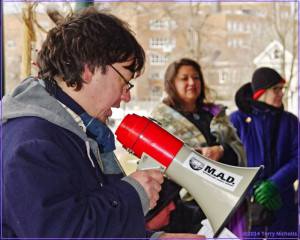 Whether it is working in the community or working in the business world, Karl Dockstader brings a grounded sensibility mixed with a drive to improve. Understanding where we fit on our Mother the Earth and where one can help make improvements is the key to Karl’s success. By stabilizing his path and proceeding with gratitude for what he has and an understanding of what he needs, Karl is poised to continue to contribute to make his reality a positive reality for everyone in his growing circles.

Over in the Twitterverse:

Want ByKarl articles as they get published?